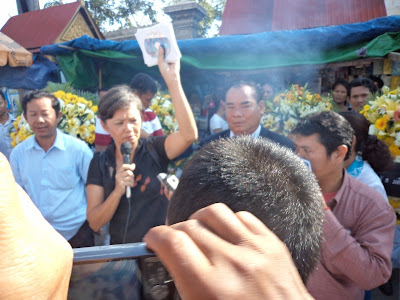 MP Mu Sochua holds up copies of Who Killed Chea Vichea?
at this year's memorial ceremony
Today marks the the passage of eight years since the murder of Chea Vichea, as well as eight years of failure by the Cambodian government to investigate the crime. Two men featured in the film Who Killed Chea Vichea? served nearly five of those years in prison, and are now on provisional release, in theory waiting for a re-trial that could clear the way for an investigation.

This year the Free Trade Union (now led by Vichea's brother, Mony) decided to cancel their annual march to the site of the assassination, saying it would conflict with laws related to the ongoing Senate election. Instead, according to the Phnom Penh Post, about 100 people attended a memorial ceremony at nearby Langka temple.

Opposition member of parliament Mu Sochua held out copies of Who Killed Chea Vichea? as evidence to justify an investigation into the case and said that she "handed a copy to an agent of the Ministry of Interior who was in the crowd asking him to take it to his bosses."

However, according to the Post, an Interior Ministry spokesman said the ministry cannot re-open the investigation into the murder since the two men are still officially guilty.

“The suspects in this case have been temporarily released, so they cannot be officially acquitted at this time,” spokeman Khieu Sopheak was quoted as saying. “If the court decides to acquit because these suspects are not the right people, we will re-open an investigation.”

“If you are brave, tell us who the high-ranking officials are,” he said. “You have defamed these officials, you must say who they are if you have the documents to prove it.”

The spokesman did not explain, at least in the article, why a person would have to be brave to make such an accusation.