Chea Mony has always been clear that Born Samnang and Sok Sam Oeun did not kill his brother, Vichea. He even rejected a compensation payment that the court ordered them to pay his family.

Now that the appeals court has reopened the investigation, Mony, who was elected president of the union Vichea led, is pointing the finger at the government--and the government doesn't like it.


"I am ready to take responsibility and dare to be imprisoned for my conclusion about my brother's case, which is that the government prepared a plan to kill my brother."

A government spokesperson has already announced that it plans to sue Mony, though it has not yet filed the suit. In Cambodia, judges can order imprisonment for libel, in addition to monetary compensation.

In recent months the regime has been using the courts, which it controls, more and more frequently to silence its critics.

In the most recent case, opposition member of parliament Mu Sochua lost her defamation suit against Prime Minister Hun Sen, who then won his countersuit against her after having her stripped of her parliamentary immunity.

Meanwhile the United Nations and the ILO have welcomed the reopening of the investigation, saying, "It now seems beyond doubt that there is insufficient evidence to maintain the charges against Born Samnang and Sok Sam Ouen. ...The charges against the men should now be dropped, allowing the police to resume the search for those really responsible for shooting Chea Vichea in January 2004."

Who Killed Chea Vichea? director Bradley Cox comments on the United Nations' call for the Cambodian government to drop the charges against Born Samnnang and Sok Sam Oeun.

Read the transcript
Listen to the audio (Windows Media)

A longer wait for justice

Born Samnang and Sok Sam Oeun appeared on Monday at the Appeals Court, which was under orders from the Supreme Court to re-open the case.

And re-open the case it did. The judge ordered further investigations. While he did not clear Samnang and Sam Oeun of the murder of Chea Vichea, he said they should feel like "free men that can enjoy all their rights."

An observer at the hearing writes:


We're left with mixed feelings. On one hand, everyone's happy they were not sent to back to jail but realistically that wasn't going to happen. On the other hand, it's now five and half years, and the prosecution has failed to build a case against the two; in any decent country, their charges would have been removed.

It appears the appeals court had to open such a hearing to fulfill the order to re-investigate. If this is true, then I guess the re-investigation will last for roughly a century.

The Cambodian authorities are in a trap of their own making.

Under international pressure, they convicted two innocent men, as we show in Who Killed Chea Vichea?.

In theory, what should happen now is a real investigation to find the actual killers -- exactly what they tried to avoid by framing Samnang and Sam Oeun five and a half years ago. The fact that the court didn't exonerate them puts an end to any hope of that, if there ever was a hope.

Anxiously awaiting news from the Appeals Court, which is scheduled to re-hear Born Samnang and Sok Sam Oeun's case tomorrow.

It seems as if the closer the movie gets to being finished, the more the outcome of their case changes. As of now they are free -- we hope the Cambodian government doesn't reverse that.

From the English-language version of VoA's radio interview in Khmer:

“Who Killed Chea Vichea?,” a new documentary from filmmaker Bradley Cox, screened in Rhode Island last week. ...Rights groups have welcomed the film, claiming it sheds light on the innocence of the two men and the shortage of independence within the court system.

“Evidence in the video will show better that neither of the accused were Chea Vichea’s killers in 2004,” Om Samath, a rights investigator for Licadho who has been following the case, told VOA Khmer last week. “This is a good thing that will push the Appeals Court to seriously look into the case and hopefully be able to bring the real killer for prosecution and give justice to the victims.” 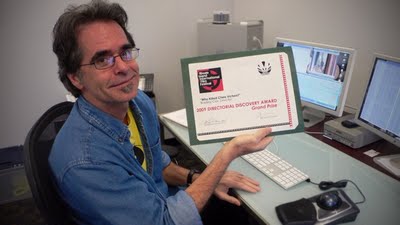 Bradley Cox, 2009 winner of the Grand Prize for Directorial Discovery at the Rhode Island International Film Festival, for Who Killed Chea Vichea?

Thanks to everyone who turned out for yesterday's screening of Who Killed Chea Vichea? at the Rhode Island International Film Festival.

This was my first time screening a film at a festival, and I was pretty nervous going in. But wow, people actually showed up, filled the theater, watched attentively, reacted at the right places, forgave the technical defects that remain to be fixed, and asked smart questions at the end. You got it. We actually have a movie here!

Thanks to everybody who helped out -- Bill, Christine, Susan for postering, the GCB for hosting the party, Judith and Peter for sponsoring the pizza. And everyone else who helped out in little ways, or just showed up to support the film.

It's been a long road to get to this point, and we still have a little way to go, but being there to see an audience appreciating the work we've done is quite a reward.

After seven and a half months of freedom, Born Samnang and Sok Sam Oeun are scheduled to go back to court on August 17.

The Appeals Court has been instructed by Cambodia's Supreme Court to re-investigate the charges against them: that they murdered Chea Vichea on January 22, 2004. It is on that charge that they served nearly five years in prison.

“I want the case to end soon because I am innocent,” Born Samnang told VOA Khmer. “I have done nothing. I am waiting for the court to pass its judgment.”

Whatever the outcome of this new hearing, it will be yet another trial related to Chea Vichea's murder in which has nothing to do with the murder itself. As we show in Who Killed Chea Vichea?, the police immediately set about framing these two men, apparently to the exclusion of carrying out any real investigation.