Macalester College in St. Paul will host a screening of Who Killed Chea Vichea? on April 26th. The screening will be followed by a discussion with producer Rich Garella and Macalester's Erik W. Davis, Cambodia scholar and Assistant Professor of Religious Studies.

We're happy to report that Who Killed Chea Vichea? has been accepted to the Minneapolis - St Paul International Film Festival, running from April 15 to May 5.

Look for Who Killed Chea Vichea? at the Aljazeera International Documentary Film Festival, taking place in Doha from April 21 to 24. Director Bradley Cox will be in attendance.

The Ohio premiere of Who Killed Chea Vichea? will be at the Athens International Film + Video Festival on April 23. Our screening will start with the short films Over There is Over Here and Reise ohne Rückkehr—Endstation Frankfurter Flughafen.


Saturday April 23 at 2:15pm
Athena Theater, 20 South Court St (map)
Athens, Ohio
Since this a competition screening before 5pm, admission is free! Get more info and see the full schedule at the festival web site.

Who Killed Chea Vichea? comes to the city with the second largest Cambodian community in the United States -- Lowell, Massachusetts:

Admission is free but we will be asking for pledges to support distribution of the film outside the US and especially to Cambodians. Producer Rich Garella will be there for a discussion after the screening.
Presented by the Lowell Film Collaborative and Lowell National Historical Park. 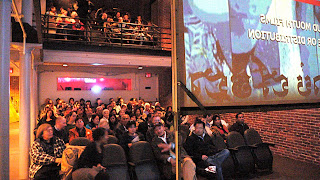 "We’ve screened almost 80 films here in Lowell since founding the Lowell Film Collaborative two and a half years ago. We are in full agreement that this past Tuesday’s (April 19) screening of Who Killed Chea Vichea? was our most successful screening yet..." (more)

Who Killed Chea Vichea? will screen in southern California's Riverside International Film Festival, in a double bill with the short film Afghan. Followed by Q&A with producer Rich Garella. 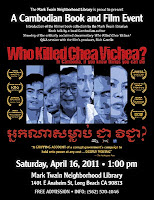 This screening is sponsored by PraCh Ly and MUJESTIC and will also be followed by Q&A with producer Rich Garella. 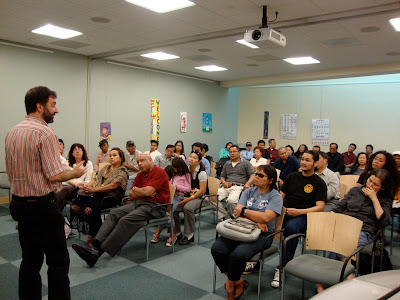 The first of two chances to see Who Killed Chea Vichea? in Long Beach, home of the largest Cambodian community in the United States, is at the historic Art Theatre of Long Beach.

A three-film series starts on Wednesday April 13 with the world premiere of Daron Ker's Rice Field of Dreams (see facebook for info).

On Thursday it continues with the Long Beach premiere of Who Killed Chea Vichea? and a return engagement of the award-winning Enemies of the People: 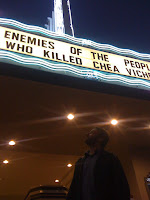 Art Theatre of Long Beach
2025 East 4th Street (map)
Tickets are available at the box office, online, and at the door. This is a double feature -- one ticket is good for both films!

The second screening of Who Killed Chea Vichea? in Washington state is at the University of Washington in Seattle. The film will be followed by a discussion with Rich Garella (producer of the film), Virak Ou (Director of the Cambodian Center for Human Rights) and UW faculty.
Tuesday April 12 at 4:30pm
Allen Auditorium
Allen Library, ground floor, north wing (map)
University of Washington
free admission and open to the public
Thanks to the University of Washington Libraries, the Southeast Asia Center, the Global Studies Center, the Law, Societies & Justice Program, the Jackson School of International Studies and the School of Social Work for sponsoring this screening!

The first of two screenings of Who Killed Chea Vichea? in Washington state will be at the Harambee center in Renton, just outside Seattle. Producer Rich Garella will be there for discussion afterward.

Who Killed Chea Vichea? will screen at the Khemara Rangsey temple in San Jose on Thursday, April 7.

Who Killed Chea Vichea? comes to the East Bay, by invitation of UC Berkeley's Center for Southeast Asia Studies. Free admission and open to the public. Producer Rich Garella will be there for Q&A.

Who Killed Chea Vichea? is one of 29 films selected for the the AAS-ICAS Film Expo 2011: Seeing Asia Eye To Eye in Honolulu, Hawaii.

The screening is on Friday, April 1 at 9am (yes, in the morning!) in the Hawai'i Convention Center’s 'Emalani Theater.

This is part of the AAS-ICAS Asia studies conference, but screenings are free and open to the public. Grab your Kona coffee and come on down!

The Paris premiere is on! Who Killed Chea Vichea? will screen in the International Human Rights Film Festival of Paris (FIFDH de Paris).

Oui, it will have French subtitles (thanks to François, Eric, Chrystèle and Christine). The festival runs from March 8 to 15; the full lineup is here.

Can you stop it? I am a businessman and I need to run my business for a long time.

-- restaurant supervisor
A third attempt to show Who Killed Chea Vichea? to garment workers in Cambodia was blocked on Tuesday March 8, this time by management of the restaurant where the union federation was screening it. Two previous attempts to screen the movie have been broken up by riot police.

A restaurant employee told Voice of America that local authorities called the restaurant and ordered the screening halted. Also on Tuesday, the governor of Phnom Penh barred a coalition of women's groups from holding a gathering to celebrate International Women's Day.

The audience at the restaurant did get to see the first 25 minutes though, according to The Phnom Penh Post.


Representatives of the Free Trade Union -- which Chea Vichea headed at the time of his assassination in 2004 -- gathered today along with officials from the opposition Sam Rainsy Party and the embassy of the United Kingdom in an attempt to screen the 2009 documentary Who Killed Chea Vichea? by American director Bradley Cox.

... Gathering at Daun Penh’s New World restaurant, those attending the screening got about 25 minutes into the film before the power in the building was cut off and restaurant security ordered a halt to the proceedings.

“Can you stop it? I am a businessman and I need to run my business for a long time,” restaurant supervisor Ny Sin told Rong Chhun, president of the Cambodian Confederation of Unions.

On March 10 the Post reported that authorities denied ordering the electricity cut to halt the screening of Who Killed Chea Vichea?.


Khieu Sopheak, spokesman for the Ministry of Interior, said yesterday that a power outage could be to blame for the failed screening. He warned the FTU against using electricity problems to provoke authorities and start a Tunisian-style uprising.

“Do they want to do as Tunisia?” said Khieu Sopheak. “Be careful about closing the door to beat the dog.”

In January, Prime Minister Hun Sen made a speech in which he threatened an unnamed critic. "I would like to send you a message that if you provoke or foment a Tunisia style-revolt, I will close the door to beat the dog* this time,” Hun Sen said, as reported in the Post.

“This guy, if he enters Cambodia, will face arrest. This guy has a bald head. This guy says Cambodia should look to the style of Tunisia: if you dare to gather [the people] to do that please come, don’t say such silly words … I will beat you on the head.”

A third attempt to screen Who Killed Chea Vichea? in Cambodia was thwarted on Tuesday March 8, 2011 -- International Women's Day.

The screening was at a large restaurant in Phnom Penh, but electricity was cut after 25 minutes, leaving an audience of two to three hundred garment workers (plus representatives of the UK embassy) disappointed. A restaurant employee said management received a call from authorities ordering them to stop the screening.