We are saddened to report the passing of Mr. Vuon Phon, of Takeo province, on Sunday April 12. He lived to see the release of his son Sok Sam Oeun from prison just a few months ago.


"He was a class act. He always impressed me with his dignity, his wisdom and his tenacious devotion to his son. I enjoyed his company immensely. I've met many good people while working on this project, but I admired Vuon Phon greatly. Another friend described him as majestic. I think it's a good word. He will be missed."

We extend our condolences to Sam Oeun and to the rest of his family. 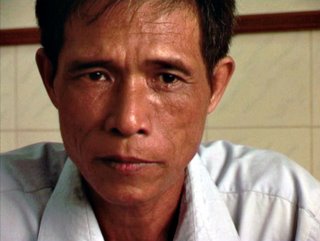 Screening and Q&A at Harvard 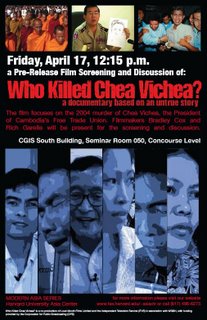 download this poster
An announcement for those of you in and around Boston:

On Friday April 17, Brad and I will be screening a preview cut (that is, not totally finished) at Harvard University's Asia Center.

It starts at 12:15pm in the CGIS South Building, seminar room 050, concourse level, and is followed by a Q&A.

If you're in or near Boston, this is great chance to get an early look at the film before the final narration, music and graphics go in. It's open to the public and admission is free.

Here's how to get there: