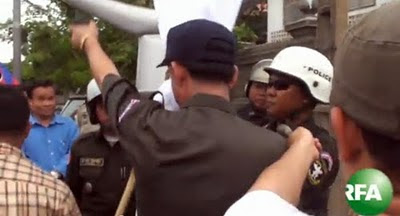 Video from RFA
Cambodian workers who hoped to see Who Killed Chea Vichea? on International Labor Day didn't get so much as a bite of popcorn before police intervened and tore down the screen.

From witnesses on the scene:

The workers' march arrived at the screening site, in front of the newsstand where Vichea was killed, around 5:00pm.

They were met by a force of riot police, as well as local officials and a large group of other men not in uniform, presumably plainclothes security forces.

The organizers went ahead and erected the screen, which was made out of sheets. The police immediately told the main organizer, Rong Chhun of the union confederation, to take it down as he did not have a permit. When he refused, they pushed in and pulled it down.

Mr Chhun returned with a second screen, accompanied by opposition members of parliament, but that screen too was seized.

The workers resisted only briefly. "We did not want to have a big scene as we were outnumbered," said one participant. "They were there to break down anything and for sure it would have been real force had we resisted and shown the movie."

So far there are no reports of any arrests or injuries.