Justice delayed is justice denied. It's normally intended as a cautionary maxim. In Cambodia, it's more like tactical advice.

The unions intended their May Day screening of Who Killed Chea Vichea? to pressure the government to investigate the murder, which took place in 2004, and find justice. But the screening was stopped by the police.

Now we find this, from Voice of America:


Government officials have said they will not investigate the murder further until two suspects, Born Samnang and Sok Samoeun, are officially cleared by the courts. 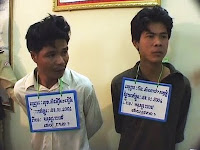 In Cambodia, it's the duty of the court to carry out the investigation. But the court has only investigated Samnang and Sam Oeun, and none too well at that.

The result: By focusing on them, the court has effectively chosen to avoid the facts surrounding the crime itself. The evidence. The witnesses. The motives. For over six years it's been delay, and deny.

Samnang and Sam Oeun were provisionally released over a year ago by order of the Supreme Court, which told the Appeals  Court to reinvestigate the case. That's what they're doing now, they say. Still, it remains an investigation into who didn't kill Chea Vichea rather than who did.

Until the Appeals Court retries them,  Samnang and Sam Oeun can't possibly be cleared--and until they are cleared, there won't be an investigation of who killed Chea Vichea. Other than ours.