I arrived at the Supreme Court at 7 a.m. A lot of photographers and journalist friends of mine were already waiting there, but no one was very optimistic about what was about to happen in the next few hours. I couldn't find a single person who thought that Born Samnang and Sok Sam Oeun would be released that day. I had to include myself in that too.


The two men arrived shortly before eight. Since cameramen and photographers aren't allowed inside the courtroom, we were only allowed a few seconds to take pictures as they were hastily brought inside. 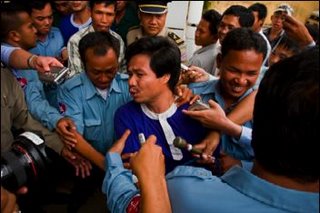 Photo © Peter Harris; used by permission.
It resembled a rugby scrum, but this was one occasion where being taller than the average Cambodian really comes in handy.

Almost a hundred people waited outside, including twenty-five members of Sok Sam Oeun's family. Officials from the American, French, Swedish, German and Australian embassies listened to the proceedings inside. The hearing went on all morning, much longer than everyone expected. 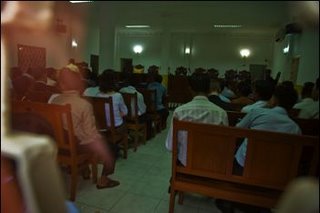 Photo © Peter Harris; used by permission.
Everyone was confident that the court would delay its decision for another day when less media would be around. Why have an audience when delivering bad news?

To everyone's surprise, after about four hours, there was a recess, with a decision to come afterward. About an hour later, the verdict was announced. Born Samnang and Sok Sam Oeun were to be released!

It was a complete shock to everyone. No one could believe it, people were giddy, even the guards were smiling. Sok Sam Oeun's mother, who had barely said a word in all the time I've known her, was talking non-stop.

And in the five years I've known Born Samnang's mother, it was the first time I ever saw her smile.

There was just one last problem, getting the paperwork done so that Born Samnang and Sok Sam Oeun could be officially freed.In the meantime they were driven back to the prison. 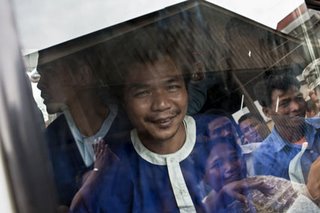 Photo © John Vink; used by permission.
And it was a lengthy, bureaucratic process. Supreme Court justice Dith Munty had to sign an official document ordering their release, then it had to be delivered to the Ministry of Interior and signed off on and then brought to the warden of the prison for his OK (plus a few other steps that I can't quite remember), all before Samnang and Sam Oeun could actually be set free.

The folks at Licadho (the human rights organization that has championed their case from the outset) was anxious to get them out the same day since the next day was January 1, a holiday when all government offices would be closed.

After five years in custody for a crime they didn't commit, it seemed just plain wrong that they'd have to wait another two days for the paperwork to go through. But by 5 pm, the documents were still in transit and nobody was quite sure where they were.

But the resourceful Licadho staff pulled a few strings and at 7 pm, Born Samnang and Sok Sam Oeun were released.

I very much wanted to film the moment of their release and their re-uniting with their families. But the sky was dark, there were no lights and it had started to rain. Prison officials refused to let me shoot inside the prison and once the two men had stepped outside, it was like stepping into a sea of black ink. I couldn't see a damn thing. I thought I had lost the moment, gone for the lack of light or even a moon.

It was then that Born Samnang's mother insisted on bringing her son to the pagoda to cleanse him and wash away the bad events of the past five years. 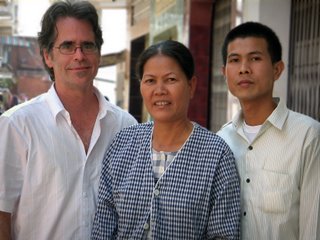 Photo © Loud Mouth Films 2009.
So we all went to the wat. And then there was light. A meager neon light but it was enough.

A Buddhist monk, smoking like a chimney, sprinkled holy water on Born Samnang and Sok Sam Oeun as they kneeled side by side. I thought this was largely a figurative ritual but no! The monk lit another cigarette and proceeded to hose them down with a garden hose. For a full five minutes. Can't get too clean. The water was freezing, their bodies were shivering, their teeth chattering and Sok Sam Oeun was laughing hysterically.

Afterwards, the parents dried them off and it felt as if the two families were one. It was finally time for them to go home.

I had anticipated a kind of "Midnight Express" ending where the son is finally reunited with overjoyed family members. But there was no exuberant celebrations, no boisterous outbursts and it was was so much better. It was a good way to end the year.

And it's all on tape and pretty soon, you'll see it all.