OK, I lied a little. We didn't just go to Thailand, of course. We went to Cambodia for a few days of shooting. Lots of additional interviews, locations and background -- being careful all the time, of course.

One striking thing, among many, was that people constantly reminded us that this case is one of the most sensitive in recent years for the Cambodian government. Few people, whether officials, journalists, garment workers or anyone else will speak openly about it. That in itself tells you something about the country. But we filled out a lot of elements and it's going to be an even better film because of this trip. Especially because a number of people (who can't be named) helped us at some risk to themselves.

To top off the trip, we were able to talk our way up to the top of Phnom's Penh tallest building (under construction) for some nice aerial shots. Here's a still: 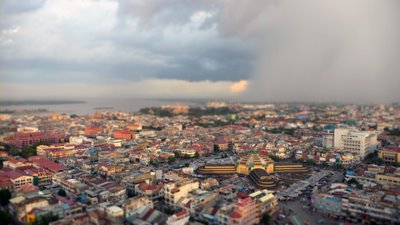 Comments:
Hello ~can I use pictures of Phnom Penh for a job?, I want to make Cambodia manual ~